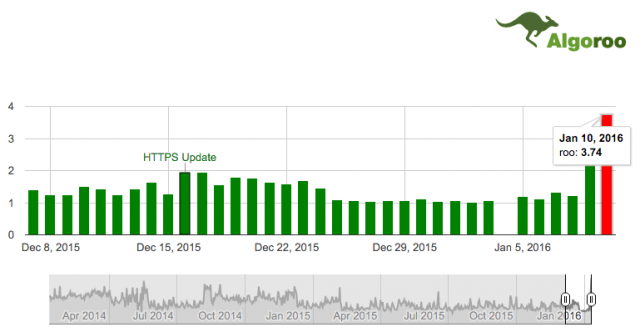 Keeping this short since by next week we should know a lot more, but it looks like Google is testing some seriously large updates right now. Many are suspecting the long awaited Penguin Update. The forums are all full of chatter.

In our internal testing and tracking at Smash Digital we have seen some big movement back on forth. Some sites would have a huge swing, and then be back to normal within a few hours.

Either way, big stuff will come soon. More on this next week.

How Apple Could Play Spoiler for the Search Ad Business

An interesting look at Apple’s position in the search game, and some possible impacts for Google if it decides to subtly push Google away from it’s Safari/Spotlight system.

Though this article contains no real news on advancements made to Apple search, it does explore some interesting possibilities, and some possible outcomes of the different moves Apple cold make.

What happens if Apple starts showing two or three times as many of its own site or app suggestions in Safari, pushing Google’s autocomplete search suggestions farther down the page or even below the fold?

It’s easier to imagine Apple serving up two or three solid results for any given query than it is to imagine them producing a full search engine that can compete toe-to-toe with Google.

This one is pretty neat, but may be a bit beyond anyone without some coding chops. Google has made their knowledge graph API available in late December. This will allow users to query Google’s knowledge graph database to see things like: auto-completing queries, or getting a list of results sorted by relevancy.

The API also allows users to get a “a ranked list of the most notable entities that match certain criteria.” This is conveyed as a numeric value for the EntitySearchResult property resultScore. The description of resultScore merely states that “[r]esults with higher resultScores are considered better matches.”

A marketer working for a franchisee of a bigger business (think an independent insurance agent part of a bigger brand, like Geico, competing for local business with other agents) found that appending “&filter=0” to a search query displayed all un-filtered results.

As the article states, it really isn’t a surprise that Google doesn’t want to show 1,000 similar sites, but starts to show more diverse results (such as including yelp/wikipedia, etc., instead of just a huge list of Geico sites).

The article has some interesting insights, and gives some advice on how to avoid getting stuck in this filter.

Make the pages for your locations more different. When I compared two of the filtered pages for one insurance brand, the content on the two different agents’ pages was 77% the same. I looked at two location pages for a tax accountant business in the UK and they were 81% the same. A lack of unique content is an easy way to trigger Google’s filter since the pages look like duplicates. Be wary of using widgets that copy the same content to every page.

Shady SEOer Gets 3 Years in Prison (for Rank Extortion)

File this one under “what not to do.” An SEOer (named William Stanley) was hired by GE for some SEO work, but after GE talked about ending the relationship, William told them he would post negative comments/websites that would rank well for valuable branded terms. GE ended up giving him $80,000 to avoid the negative SEO.

Because of Stanley’s threats to harm GE’s reputation through negative Internet posts that would adversely affect GE’s ability to conduct business if it failed to send money, GE responded to the wrongful inducement by sending four payments totaling $29,556 by MoneyGram to Stanley in Brasov, Romania.

According to the factual resume, the government could readily prove that Stanley’s extortive conduct caused GE to make the above payments and to lose revenue. The extortive conduct also affected interstate commerce. In addition, the government contended that it could readily prove that Stanley engaged in similar extortionate conduct with approximately 40 to 45 victims (including GE).

Duck Duck Go, a small search engine focused on privacy, ended the year with a 12,000,000 queries-in-a-day milestone. For comparison, in June 2015, they hit the milestone of getting 10,000,000 searches in one day. Though they have way less reach than Google–they’ve got significantly less reach than Bing or Yahoo for that matter–it’s always a good idea to keep an eye on things that could potentially matter to your SEO strategy.

And how about a few statistics to round off our review? In 2015 DuckDuckGo turned seven years old with a total of 20 developer meetup groups. They and many other contributors brought the total of Instant Answers to over 660, and suggestions from users helped to increase our bang search shortcuts to over 7,500! Finally, the growth we saw throughout the year culminated in hitting over 12 million direct searches in one day in December. Wow! It’ll be an exciting ride to see if we can beat that in 2016…

Though they’re still a ways away, DuckDuckGo.com continues to gain users.

The Great Featured Snippet Update of 2020